In a post-apocalyptic world where cities ride on wheels and consume each other to survive, two people meet in London and try to stop a conspiracy.

“Mortal Engines” is a let down.

Although the special effects are rather good, the film borrows so heavily from the “Star Wars: The Empire Strikes Back,” that it should have been made part of the franchise.

I won't go into details about what is stolen and all, but shame on Peter Jackson for hyping this as something original and then bringing us a weak photocopy of an original work.

I am surprised there aren't lawsuits being bandied about over this obvious imitation.

Because I expected more from Jackson, “Mortal Engines” gets a D. It's rated PG-13.

The sequel to “Fantastic Beasts and Where to Find Them,” takes a darker turn as the maleficent Grindelwald, played by Johnny Depp, begins his plot to take over both the Wizarding World and the muggle world.

“The Crimes of Grindelwald” is an ridiculously complicated film with too many sub-plots and unnecessary characters to really keep track of.

Most of the sub-plots in the movie really don't amount to much and are tacked on to give the film some diversion. But these subplots simply are meaningless and time consuming.

The main plot of the movie is the private war between the evil Grindelwald and a younger Dumbledore, played by Jude Law.

This war has almost nothing to do with Newt Scamander, played by Eddie Redmayne and his gang from the first film.

In fact, I can not really see a reason for Redmayne to be in this film at all, except to provide a bridge from the first film to the second.

The film does offer some solid special effects, but those effects are hindered by chophouse editing and uneven pacing.

In the end, “Fantastic Beasts 2” is an overindulged excessive film that makes its audience work to hard for a lackluster resolution. 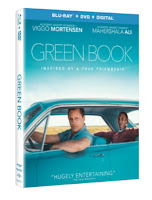 A working-class Italian-American bouncer becomes the driver of an African-American classical pianist on a tour of venues through the 1960s American South.

As the two begin see life though each other's eyes, they begin to form a deep friendship.

"Green Book" is a satisfying buddy picture with outstanding performances by the leads. The film's stars, Viggo Mortenson and Mahershala Ali, counterbalance themselves perfectly.

And, although each performance has a rhythm of its own, the two  manage to create a syncopation that is memorable and touching.

At the 2019 Academy Awards "Green Book" took home 5 Oscars in all, including one for Best Picture and a Best Supporting Actor statue for Mahershala Ali.

"Green Book" is not without its imperfections, but it manages to use its flaws to its best advantage.

Posted by Tony's Talking Pictures Blogs at 3:47 PM No comments: