In this retelling of the famous English legend, Robin of Loxley goes from Old English playboy to a battle-hardened sniper during the Crusades. Upon seeing the grimness of war, he is changed.

There is a difference in retelling and reinventing. This “Robin Hood” reinvents the legend but without justifying the changes to the story. Most likely a group of producers sat around a table and started by saying “wouldn't it be cool...”

Wouldn't it be cool if Robin Hood was a rich spoiled brat who got drafted to fight in the Crusades?

Someone needed to say “No. It wouldn't be.”

What “Robin Hood” is a miserable mixture of strung together scenes looking for social relevance, scenes of battle with bows and arrows are shot as if we're watching a Gulf War movie, scenes with the evil Sheriff of Nottingham (Ben Mendelsohn) are melodramatic and over acted. And scenes with Marian insulting the Sheriff to his face and going unpunished. Especially when its established he can end someone's life with a finger snap.

Because of those terrible decisions, “Robin Hood” is a ridiculous film so poorly written it is unintentionally funny. 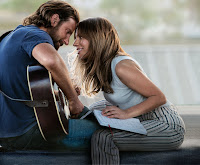 Posted by Tony's Talking Pictures Blogs at 3:25 PM No comments: