“Dog Days” follows a group of interconnected people in Los Angeles who are brought together by their lovable canine counterparts.

A slightly better-than-expected comedy focusing on intertwined relationships and how they relate to their dogs.

The film is exactly what you'd expect it to be. Overly sweet, awkwardly romantic and predictable, but a good diversion film for date night.

In a small town in Massachusetts, a group of friends, fascinated by the internet lore of the Slender Man, attempt to prove that he doesn't actually exist - until one of them mysteriously goes missing.

Slender Man is a basically scary film relying mostly on visual effects to carry the script.

That being said, the film does fall into the problem being a bit too predictable in places and not flushing out it's characters. 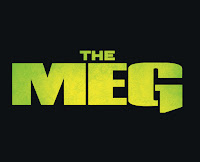 After escaping an attack by what he claims was a 70-foot shark, Jonas Taylor must confront his fears to save those trapped in a sunken submersible.

If you're looking for this generation's “Jaws,” keep looking.

“The Meg” is a monster movie. It's a summer thriller and offers a lot fun, thrilling moments and 'Gee-Wiz' opticals complimented with Jason Statham's tongue-in-cheek performance as the film's hero.

Overall I liked the film for what it is, a rip-roaring cinematic ride.

Posted by Tony's Talking Pictures Blogs at 11:24 PM No comments: