New on Blu-ray, DVD and Digital Copy for August 7, 2018 "Life of the Party" and "Avengers: Infinity War" 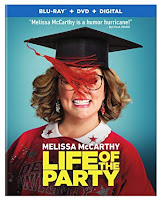 After her husband abruptly asks for a divorce, a middle-aged mother returns to college in order to complete her degree.

In this rehash of the 1986 film “Back to School” starring Rodney Dangerfield, Melissa McCarthy is the middle aged parent who returns to college to finish her degree and wreaks havoc on the college's unsuspecting students and faculty.

The biggest difference is that “Back to School” was funny. “Life of the Party” is not.

The film has the feeling that its frantically trying to make the audience laugh, when it should be making the audience care. Which after the first 30 minutes no one does.

“Life of the Party” sinks into the abyss of poorly executed low-brow gags and one-liners best suited for summer replacement sitcoms.

It gets an F and is rated R. 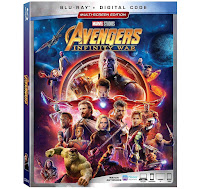 As the Avengers and their allies have continued to protect the world from threats too large for any one hero to handle, a new danger has emerged from the cosmic shadows named Thanos, who's goal is to collect all six Infinity Stones, artifacts of unimaginable power, and use them to inflict his twisted will on all of reality.

Everything the Avengers have fought for has led up to this moment, as the fate of Earth and even the universe are in jeopardy.

“Avengers: Infinity War” is exactly what has been hyped for the last year. The Marvel movie to beat all other Marvel movies.

An incredible and perfect mixture of story, art, graphics and acting make “Infinity War,” the best Marvel movie to date.

The film rivets you to your seat with terrific special effects and rewards you at almost every turn by taking chances, like a master juggler, keeping the film's humor, drama and action in the air at once.

It's available for download on digital formats and will be available next week on Blu-ray and DVD.

Posted by Tony's Talking Pictures Blogs at 9:39 PM No comments: