Caught in the crossfires of civil war, two CIA operatives must send a former U.S. diplomat to negotiate for the life of a friend he left behind.


“Beirut” is falling under some heavy scrutiny since it wasn't filmed on location and it is not historically accurate.

Taking that into consideration, I found the film to be a better-than-average thriller. Both John Hamm and Rosamund Pike are extremely watchable in this fast-paced story about a missing agent and the attempt made to rescue him.

In the end, “Beirut” is a film about friendships and cultures and the price paid for diplomacy and political gain. 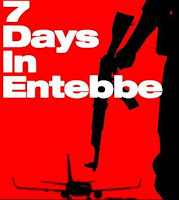 Inspired by the true events of the 1976 hijacking of an Air France flight en route from Tel Aviv to Paris, and the most daring rescue mission ever attempted.

“7 Days in Entebbe” is a complex political film that examines two sides of an event.

On one side are the hijackers, who see what they are doing as a last effort to be heard.

These revolutionaries begin in total solidarity with each other but as the drama unfolds, there is a shift as some of the hijackers may be changing their minds about the taking of the hostages.

On the other side is the Israeli government's attempt to quell the event as quickly as possible, but as times is running out for the hostages, and the long-standing rule not to negotiate with terrorists comes into question.

“7 Days in Entebbe” is a political thriller and a good one.