A dark comedy about a businessman who is abandoned in Mexico by his back-stabbing bosses to face the wrath of a drug lord his supervisors double crossed.

“Gringo” is a great example of how a movie can teeter as David Oyelowo is basically the only one in this movie actually acting. It's too bad everyone else in the film is having more fun than putting in real performances.

It gets a C for the effort and is rated R. 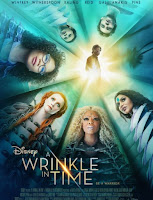 One of the best-loved childhood novels comes to the big screen as a young girl searches for her father who was lost somewhere in space and time.

The film lacks empathy and connection to it's audience. It suffers from being too much and too little at the same time. Too much CGI and not enough writing to support those effects.

Most of all “A Wrinkle inTime” is confusing and offers no explanation of who anyone is, where we are at any given time and what we're doing. The film is as if someone dumped liberal parts of “What Dreams May Come, “The Never Ending Story,” “Harry Potter,” and “The Wizard of Oz” into a blender and out this poured.

The film will baffle and frustrate the children for whom it is aimed and simply bore adults.

“A Wrinkle in Time” gets a D and is rated PG