When an elite crime squad's lead detective investigates the disappearance of a victim on the first snow of winter, he fears an elusive serial killer may be active again.

With the help of a brilliant recruit, the cop must connect decades-old cold cases to the brutal new one if he hopes to outwit this unthinkable evil before the next snowfall.

“The Snowman” keeps the audience on the edge of their seats throughout most of the film. The film is purposely paced slow, but as the story twists it begins to come to a boil.

“The Snowman” has a few problems with timing and some character development and the film is extremely graphic with blood and gore. 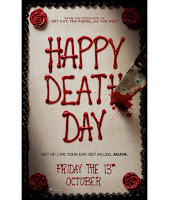 
She must relive that day, over and over again, dying in a different way each time.

In the sequel to the cult classic, thirty years have passed, and a new blade runner unearths a long-buried secret that has the potential to plunge what's left of society into chaos.

The discovery leads him on a quest to find Rick Deckard, a former LAPD blade runner who has been missing for 30 years.

“Blade Runner 2049” is a stunningly shot, cinematic feast. The style of the photography remind the viewer of the original's style and symmetry.

The film, like its predecessor, is slow-paced and deliberate.
But “Blade Runner 2049” falls short as the story simply does not know what to do with its characters. The script meanders and sputters never really coming to the boil fans of the original are expecting.

Instead, the film runs out of gas and coasts to a stop, leaving the audience with the feeling something's left undone.

In the end “Blade Runner 2049” is a wonderful example of cinematic eye-candy with little substance backing it up.

It gets a C and is rated R.
Posted by Tony's Talking Pictures Blogs at 7:56 PM