New in Theaters November 24, 2017 "The Man Who Invented Christmas" and "Coco"

“The Man Who Invented Christmas” focuses on Charles Dickens' journey and events that led him to write his beloved story “A Christmas Carol.”

The film, albeit a bit of a whitewash, follows the distressed and blocked writer as he begins working on a new novel about Christmas, a holiday not really observed much in 1842.

After Dickens begins to work on his novel, he brings in to play his own past memories of places and events and people he's known and incorporates them into his story.

After creating his main character, Ebeneezer Scrooge (played by Christopher Plummer), the writer begins to piece together the elements of what will be arguable his best known work.

“The Man Who Invented Christmas” is a wonderful family tale with good performances by Christopher Plummer and Dan Stevens.

Enjoy his harmless and entertaining film with a hot cup of nog and an extra lump of coal.

It gets a B and is rated PG.

Check out all the great Christmas movies at dvd.netflix.com and use this code for a free month 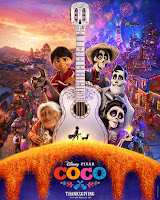 Desperate to prove his talent, Miguel finds himself in the stunning and colorful 'Land of the Dead' following a mysterious chain of events.

“Coco” is exactly what you'd expect from Disney / Pixar and deserves an A. It's rated PG.

Posted by Tony's Talking Pictures Blogs at 10:00 PM No comments: