Based on the New York Times bestseller, “Wonder” tells the incredible story of August Pullman, a boy with a facial deformity who enters fifth grade, attending a mainstream elementary school for the first time.

Although a bit saccharine in places, “Wonder” ends up being a rewarding and heartwarming film about overcoming obstacles and finding its what's inside that counts.

The film gets a B and is rated PG. 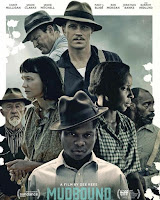 In “Mudbound,” two men return home to rural Mississippi after World War II where they face racism and bigotry as they readjust to civilian life.

Although not an easy film to watch, “Mudbound” is one of the best films of the year.

It gets an A and is rated R.

Fueled by his restored faith in humanity and inspired by Superman's selfless act, Bruce Wayne enlists the help of his newfound ally, Diana Prince, to recruit a team of superheros to defend Earth.


“Justice League” is a fan film at it's heart.

Although it really isn't covering any new ground for a superhero movie, it is fun to watch. Gal Gadot is back and in top form as Wonder Woman, who is beginning to fit in in the modern world. Ben Affleck takes on the maturing Bruce Wayne, who now realizes he can't do it alone.

Along with solid performances, the film is well-paced and even offers a few humorous moments along with it's CGI battle scenes.

Overall “Justice League” is an entertaining action film. It gets a B and is rated PG-13.
Posted by Tony's Talking Pictures Blogs at 10:20 PM