The House
Starring: Will Ferrell and Amy Poehler
Rated R

When they learn their daughter has been accepted into an elite college, two parents, who are low on funds, open an illegal gambling casino in their basement.


Another formula comedy living on one sight gag after another bringing in a few chuckles instead of laughs.

Will Ferrell plays the same wide-eyed innocent that we have seen him play for years with Amy Poehler not stretching her acting muscles much either.

As the film progresses, the couple get deeper and deeper into the seedy side of the gambling business, with less than comic results.

What we're left with is an uninspired and poorly conceived story trying desperately to make you laugh.

It gets a D and is rated R

Will Ferrell films plus thousands of others are available right now at dvd.netflix.com use this code for a special deal -- bit.ly/dvdtonyt 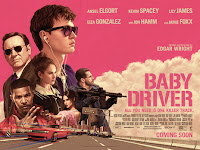 After being coerced into working for a crime boss, a young getaway driver finds himself taking part in a heist doomed to fail.

The film's main characters are two-dimensional at best and offer no connection with the audience at all. In fact the entire film seems to be misfiring as the film progresses from one silly action scene to another.

About the only thing worth while is the film's soundtrack, which offers s great collection of eclectic songs.

In the end “Baby Driver” simply tries to hard to be relevant and end up just another waste of gas and time.

If you love 'chase' films check out thousands at dvd.netflix.com use this code for a special deal -- bit.ly/dvdtonyt