In this all-animated film, a mysterious map sets Smurfette and her friends Brainy, Clumsy and Hefty on an exciting race through the Forbidden Forest leading to the discovery of the biggest secret in Smurf history.

“Smurfs: The Lost Village” is a total kid's film from beginning to end. It has a few funny moments in it that will tickle a child's funny bone, but for adults this animated adventure is mostly forgettable.

In the end “Smurfs: The Lost Village” is cute with no substance.

This is a reboot of the 1979 movie that featured George Burns, Art Carney and Lee Strasberg.

In the film, three seniors, living social security check to check, decide they have had enough. So, they plan to rob a bank even though none have any criminal experience.

At its heart, “Going in Style” is a caper film but this crime comedy is filled with tired cliche-ridden humor, a lot of yelling and wisecracking and virtually no plot to speak of.

Morgan Freeman, Alan Arkin and Michael Caine are all made out to look like wise old men surrounded by incompetent younger men. The film busies itself by having the three handing out wisdom like a ballpark hot dog vendors in mid-July.

The film never touches the core of what it's like to grow old in America. It does relish in making fun of age. Like the scene where Freeman and Caine make a getaway in an electric shopping cart or trying to show the humor in having Christopher Lloyd as a senor with Alzheimer's.

In a movie that should celebrate the beauty of aging, “Going in Style” makes fun of it in such a callous and heartless way.


Remember you can catch the ORIGINAL film "Going in Style" at DVDNetflix and get a FREE month just for signing up! 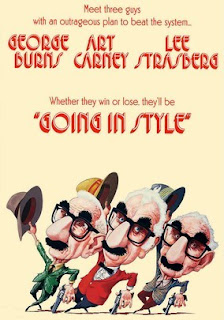