Tony's Talking Pictures Blog: Sorry I haven't been on my blog for a week! But i...

Catching Up after a Busy, Busy Week


Sorry I haven't been on my blog for a week! But it has been busy. I ended last week with a visit to Universal Studios Hollywood to chat with Tyrese Gibson.


Check out the Interview


Tyrese said they're beginning work on the 8th film in the "Fast & Furious" series, and the cast and production crew are under pressure to make it better than the last.

While I was in Hollywood, I got a rare chance to chat with Michael Dorn ("Worf" from the "Star Trek: The Next Generation" series) about his desire to bring back "Star Trek" with "Worf" at the helm of his own starship. He has an on-going campaign to get the fans involved in the process. 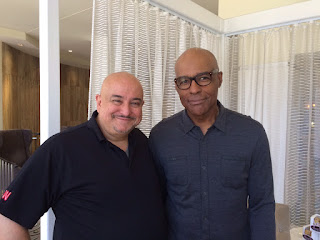 I also visited "Springfield" home of "The Simpsons" and chatted with Universal Studios spokesperson Natalie Ceballos about the fun and food you can find in Springfield, USA!

See you on the next Blog!

Posted by Tony's Talking Pictures Blogs at 12:10 AM No comments: