Tony's Reviews of Poltergeist and Tomorrowland

Legendary filmmaker Sam Raimi and director Gil Kenan reimagine and update the classic tale about a family whose suburban home is invaded by angry spirits. Then problems escalate when they take the youngest daughter.

Although I had my doubts about taking a now classic horror movie, updating it and making it work. But Sam Raimi took on the task and actually did a pretty fair job.

The film was paced well and offered enough of a build to ensure a good scare.

And even though there are some familiar moments as the new version uses some of the same scares. They are seen from a slightly different angle.

For some of us, nothing will take the place of the original “Poltergeist.” It was a wonderfully scary rollercoaster ride and is firmly embedded in our brains.

That being said, in truth this “Poltergeist” doesn't really rely on the past, it can stand on it's own.

Bound by a shared destiny, a bright, optimistic teen and a former boy-genius inventor embark on a mission to unearth the secrets of a place located somewhere in time and space called "Tomorrowland."

“Tomorrowland” is an exuberant film allowing the audience to stretch their imaginations and witness the dream of better future and the realities of maintaining it.

Britt Robertson plays Casey who represents the unfettered dreams and hopes of youth. She encapsulates the ideals of making a bright future and that nothing is impossible.

George Clooney as Walter was young and very much like Casey, but he's grown old and disenchanted. The future, for him, has become a lot of work and not so shiny any more.

Directed by Brad Bird, who gave us “The Incredibles” and “Mission Impossible host Protocol,” there is a loving rhythm to the film.


For being just different enough, “Tomorrowland” gets a B- it's rated PG.

Posted by Tony's Talking Pictures Blogs at 9:44 PM No comments:

Email ThisBlogThis!Share to TwitterShare to FacebookShare to Pinterest
Getting ready for tonight's screening of "Poltergeist." I love the original film and my hope is they add a bit more scare to the movie and not overdo the gore.

Some of the new talent in the horror world think that blood, guts and entrails are scary. but the truth is "fear" needs to be built up properly and slowly. 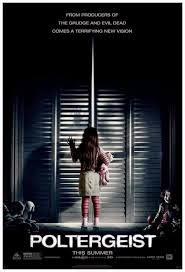 Anyway I hope its good!

Posted by Tony's Talking Pictures Blogs at 10:57 AM No comments: